Books Read:
24. The Shadow of the Wind — Carlos Ruiz Zafon (in progress)

I’m going to Barcelona for a week in a couple weeks and I wanted to read about Barcelona so I picked up The Shadow of the Wind and George Orwell’s Homage to Catalonia and, perhaps, made the mistake of starting with the Zafon book. It’s okay, but I’m finding it a slow read. Mind you, it is quite a bit longer than the average book I’ve been reading of late. But I’m not really getting into it so I find that I’m not looking forward to reading it as much as I probably should. By Jonathan Ball’s “rules” in 95 Books I probably should have just given up. The story is interesting but somewhat formulaic and some of the dialogue is patronizing. Maybe it gets better. 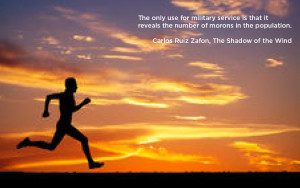 I ran a half marathon this week not to see if I could but to see if I felt like dying in the hours and day or so afterward and it wasn’t that bad. My time was alright too. When I signed up back in December to run the BMO half I estimated that it would take me about two hours so I entered my time guess as 1:59 and it turns out that was rather conservative. But I’m not really sure what I should be aiming for. I don’t have a goal in mind at this point and I wonder if that’s not a good approach to be taking. I’m thinking that I should aim for something between 1:45 and 1:49 for the BMO and then try to beat whatever time when I do the Scotiabank half near the end of June. Though I’m really going to have to figure out hydration if I want to not die during a summertime half marathon. I’m really bad at the science of running. I liked running because I could just go do it and that was that but now I have to warm up and stretch after and eat and drink “properly” and pay attention to what I eat before I run (usually nothing, which is probably a problem too) and strength training between run days and blah blah blah. It’s more work than I’d anticipated. I didn’t really anticipate anything–just point my shoes and go. I’ve learned the hard way that there’s much more to it than that.