A year and a bit ago I went to Barcelona and before I went I decided that I would pick up a couple books not necessarily about Barcelona but with some connection to there. I ended up with The Shadow of the Wind and Homage to Catalonia. I read Shadow and it was pretty awful. And Homage sat on my shelf and then suddenly Catalonia was in the news and so I figured it was a good time to get some back story. The book is pretty great, and so relevant to today, not least for the fact that the Left still cannot get its collective shit together and just work towards a common goal rather than fighting about every little nuance of disagreement. So some things never change. 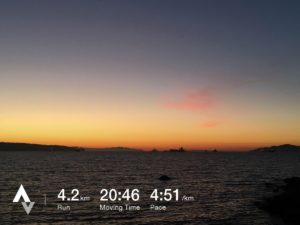 I went to physio and the physio said, no more … well what actually happened is that I said that I was a bit concerned that I was going to run terribly at the Fall Classic and was feeling really out of shape and that I maybe wasn’t so concerned about my knee, because I have self-detrimental willpower when it comes to running (which is probably partly why I’m in this mess in the first place) and she said maybe you should switch to the 10 km. That’s what she said. So I did and for a little bit there I felt like a bit of a fraud claiming the RunVan Hat Trick because I wasn’t running the half but then I figured that if I’d run the BMO Half rather than the full marathon in the spring I wouldn’t think my hat trick was a fraud so I’ve managed to justify that BMO Full + Turkey Trot + Fall Classic 10KM does = legitimate hat trick. Still wanted to run the half though. Still disappointed.