I’m sort of cheating putting two weeks into one post but I was traveling eight of the fourteen days and it seemed an easy way to get past this little blip in my reading-running-writing endeavor, so here it is. I didn’t read much before, during or after my jaunt to Barcelona. Before was overly occupied with getting ready to go. During was entirely occupied with doing stuff. And after was recuperation, and, let’s be honest, getting caught up on The Division. If you don’t know what that is, that’s ok. Anyway, I knew I wasn’t going to read much so I only took my iPad, preloaded with a few books I thought that I might attempt, along with the new, no-nudie March issue of Playboy I managed to procure on PDF (ahem…) and a full-access New Yorker app graciously given to me by the lovely SC. I didn’t read any of the books. I find it difficult to read books on airplanes for whatever reason. I did consume a bunch of articles, a few of which I listed above, in the order I recall that I read them. I think. The Voyeur’s Motel was entirely captivating from start to finish. I’d very curious to read the book, but I wonder if the article was just the right length. I’m not sure it needs a book. Maybe. I quite like Rachel Maddow, and I enjoyed her interview. She’s a lot smarter than I thought, and I thought she was pretty damn smart. Does Knausgaard really expect me to believe he was in his 20s before he masturbated for the first time? Really? Creative non-fiction indeed…. For a short bit I signed emails Godspeed. It didn’t make the list, but I thought what Rathbone included was pretty great. Assad is terrifying. I had no idea. I had a bit of an idea. But didn’t think it was this bad. But I also wonder if it was a propaganda piece. James’ rundown made me want to re-binge-watch Game of Thrones in advance of the new season starting up in a couple weeks. That’s definitely going to cut into my reading time. 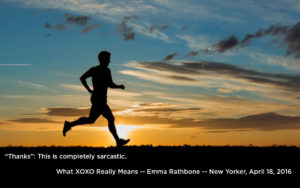 I ran three times, including today. I didn’t run at all in Barcelona. The Sun Run is on Sunday and while I’m not worried about it I really want to smash my last year’s time and I’m not feeling overly confident that I’m going to do all that well. A year ago I’d run 10 km less than a half dozen times in my life. Now a 10 km run is my short run. I find it incredible how much I’ve progressed in the past year. I certainly don’t regret the time off in Barcelona, but I think next year I’ll plan my spring trip a week or two earlier. I also wish that I would have run in Barcelona, and I think I’m going to make an effort to run at least once where ever I travel from now on, just for the experience of doing it. Turns out we stayed not too far from some great running and I sort of feel like I missed out.