I enjoyed Submission in spite of finding the narrator François rather unlikable. Not dislikable. I just didn’t feel anything for him one way or the other. I like how through François Michel Houellebecq seems to be poking fun at the ridiculous notion that Islam is coming to take over the West and annihilate its culture. It’s rather smart satire, I think, in spite of my limited knowledge of French culture and politics. The ending seemed a bit too predictable. A good read regardless. This is my first Houellebecq book and I will probably read more of his stuff. Although The Weather gets (or seems to get) the acclaim, I enjoyed Magenta Soul Whip more for reasons that I can’t quite put to keyboard. I think I prefer the rambling styling of The Weather versus the familiar poetic form found in Magenta, but still I enjoyed Magenta more so. I’m not sure why, and my aching knee that refuses to be dulled by any amount of wine is hindering adequate introspection. 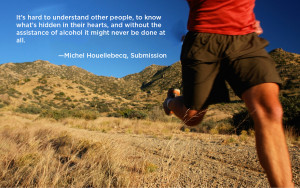 I didn’t run much this week, as you can see from the paltry 6.33 km logged above. My knee has been agonizing so much so that I’ve decided to explore physiotherapy. I got the official blood test results and the doctor is indeed convinced that I pushed a little too hard and nothing much more. I talked to her about my knee and asked about physiotherapy and she agreed it was probably a good idea and recommended a place and therapist nearby. I’ve booked my first appointment for January 27 and in the meantime bought an over-the-counter knee brace from London Drugs for $50. At the very least I’m hoping for a bit of placebo.