I need to break out of this new habit that I’ve formed of coupling multiple weeks into single posts and get back into a habit of posting once per week. Though that depends as well on me reading enough to have something to write about reading. Running doesn’t seem to be a problem, although having something interesting to say about running on a weekly basis is getting a bit trying. Anyway, two weeks, and two books with nothing in common except that they are both excellent reads, by women, originally written in french, from Quebec, and in translation. And I swear I didn’t do it on purpose. I took the Brossard along for some fill between the shouting matches I was dutifully stenographing at the Federal Mediation and Conciliation offices, as is one of the things that I now do in order to purchase food and wine and housing and books. I don’t know why I chose to pick up the Arcan afterwards. It’s not a happy book, as none of them are, but her writing is so great. It’s a beautiful train wreck. I have two of her books left to get to and through. I just don’t think I can do them in a row. 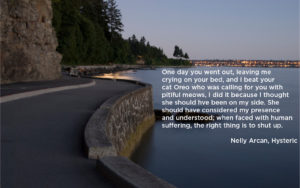 Week thirty three was really rather thin on the running side of things, partly because I’ve been really focusing on swimming and minutely because I went to Kelowna for the weekend for my sister’s wedding and didn’t run at all. A really terrible excuse. Anyway, for all the complaints that I have about the accuracy of Fitbit and Strava they do both seem to be relatively consistently inaccurate, which is interesting when I look at Strava especially, because Strava likes to do this subtle shaming thing (in my case) where it looks at similar runs/routes and shows an overall trend. And my overall trend in Strava is that I piqued sometime back in February and my pace has slowly but steadily declined ever since. It has made me wonder if this is a product of age or because I don’t actually train or because I’m wearing myself out by running 40 to 50 kilometres per week without really giving myself a break. So I’m giving myself a bit of a break and I’m going to see what happens. Take a few days off (I can’t remember when I last took more than two days off in a row) and then go out and just see what happens and how I feel and then try to interpret that result. I’m curious, though regardless of what happens I’m sure I’ll find a way to overthink what it means. I’m good at that.