I was in MacLeod’s Books the other day and came across a signed copy of Clint Burnham’s Airborne Photo that I picked up for $8 or something. I can’t quite remember what I paid. This particular copy is signed with a personal note to Renee, whom Burnham also thanks in the acknowledgements. They’re on a first name basis, obviously. Also obviously because in the Thank Yous he’s circled Renee but he doesn’t acknowledge her last name, neither in the acknowledgements nor the note. He also took the time to correct a typo on page 135, changing “her” to “him”. At least I think it’s a typo. I liked this collection of short stories. More like vignettes. Almost Twitter length. I miss @Prof_Clinty on Twitter. I don’t know what happened there, but I’m sure there’s a [short] story involved. The first of the three volumes from the Open Text series is another from the CUE Books archives that I’ve finally gotten around to reading. It has some really great stuff in it, especially the poems from Maxine Gadd and George Bowering. I think my favourite contribution is from Donato Mancini. The book is out of print now, so if you find a copy I’m sure it’s worth at least its cover price. I suppose that it was only a matter of time before I started reading about running, and what better place to start than with Sillitoe’s novella The Loneliness of the Long-Distance Runner. I’m not sure what exactly constitutes a novella by definition, but the one that I’ve adopted for myself is “a short story with chapters”. So there it is. I suppose that a book that came out in 1959 doesn’t really deserve a spoiler alert. I don’t generally consider myself to be competitive but every once in a while it seems to come out. Hence, without giving too much away, Smith kind of irked me at the end. Alas. I did thoroughly relate to the notion of using running as an emotional escape, though I don’t know that I really think of running as escapism. Not anymore at least. 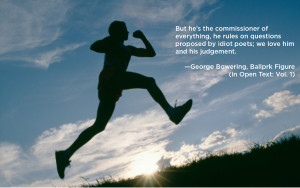 I didn’t run much this past week and for no really good reason either. I can blame the weather and the fact that I went away to Victoria for the weekend, but neither is an excuse worth anything. Not running while in Victoria seems especially excuseless, especially since I was staying mere steps from Dallas/Crescent/Beach/Road/Drive. And as I’ve mentioned previously, I like to run in poor weather, not least for the lack of other people to get in the way. On Sunday evening I ran my left-turn route — down to Beach Avenue then over the Burrard Bridge and around Science World then back home. It was dusk-getting-dark and a bit drizzly and I saw zero other runners the entire route. I was drafted for a kilometre or so by a swervy cyclist smoking a joint, though, which was a bit spooky through the secluded stretch between Granville Island and Spruce Harbour Marina. Is it swervy or swervey? I often wonder about my safety when I’m out running after dark. Cars are the least of my concerns for the most part; people are far more unpredictable. I know that if it came down to fight or flight I’m pretty much screwed either way. I mean I’m already flighting. How much more flighting can I do? And fight? Nah. Let’s be honest, I’m not much of a fighter and I’m already mostly exhausted from all the flighting. I’d probably just turtle, though tortoise seems more fitting.