So rather than read and write about it I decided that since I’ve barely read anything there wasn’t much point in writing about how I’ve barely read anything. So I didn’t. As you can see. Does anyone enjoy reading Nelly Arcan? Are you even allowed to enjoy reading her? I think I have two left to read of hers. Her work is so good but so heavy and depressing. I got to see and hear Weyman Chan read at the Talonbooks launch for Human Tissue, which I also purchased along with Chinese Blue but haven’t read yet. But I will, not least because Chinese Blue is so damn good. Trudging through nearly 400 pages of MS Word manuscript is rarely enjoyable, but I find the subject matter very interesting. I hope it gets published. And properly edited. You know, unlike this blog. 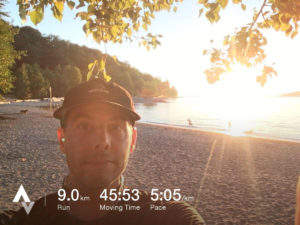 In three week I fly to Copenhagen for the Copenhagen Half Marathon on September 17 and I’m pretty excited about that. Travelling gives me an excuse to update my wardrobe, so travelling for a race must mean new running gear, right? It’s not like I need a new pair of racing flats but that didn’t stop me from picking up a second pair of the Adios 3. Plus they were on sale. I’ve been very curious about On Running shoes since their propaganda somehow started ending up in my Gmail inbox. They’re a bit pricey to just take a chance on, which makes me lament that there’s no test drive for running shoes. And then, as if my mind had been read, on Thursday at Forerunners on West 4th’s sunset run On was supposed to be on hand to demo their line up so I showed up. On, however, did not. But I had a good time anyway, with a short 9 km out to Spanish Banks and back to the store. The group is really friendly, and the run met at 7:30 p.m. rather than the typical 6:00 p.m. that every club seems to love but precludes me from being able to participate. I make it sound as if I would if I could. I’ve written here before, and numerous times, how I enjoy running for its solitude, But once in a while it’s nice to get out and be around people that also like to run. I do not know very many.