Books Read:
36. The Elegance of the Hedgehog — Muriel Barbery

It feels a bit like cheating at solitaire but I’m justifying it because I’ve fallen behind farther than I had ever wanted and this seems like the easiest way to get sort of caught up and move on and hope that this is just another blip along the way. Suffice it to say, I’ve done little reading and even littler writing. I should have just quit or postponed The Elegance of the Hedgehog because I simply did not feel like reading it. And not because the book was bad–on the contrary, it’s quite good–but simply because I was not in the mood to read it. But I stubbornly trudged on, if by stubbornly trudging I mean to say that I took nearly a month to get through it. And by get through it I must admit the latter third involved a lot of skimming towards the finish line. I should have put it aside and moved on to something else. But I didn’t and I do sort of regret it because it’s a good book. It was simply not a book I felt like reading in May and June, for whatever reason. And for that I’ve come to terms with the fact that it will take a miracle to get to 95 books this year. All is not lost. But 95 seems an unattainably long way off. 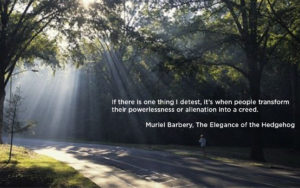 Running, on the other hand, I’ve not much faltered in the inspiration there. I’ve nearly erased the injury losses I suffered at the beginning of this adventure, and it’s looking like I’m going to be close to 1,000 km by mid-year. I do have two weeks in October whilst prancing through Scandinavia that is going to throw a hiccup into the plan–not a lot of running in prancing. But I’m hoping to front-load some credit into all of that. The other day I set out for a run and noticed that my Surge battery ws nearly dead so I took along my iPhone with WalkTracker Pro installed as a back up. My Surge survived, but the numbers at the end of the run were rather frustrating. Not only were the many of the splits between the two devices way off, by the end of a almost 12 km or over 13 km run (depending on whom your believe) the two were off by nearly 500 metres. And then of course Strava chimes in with its nonsense that barely correlates with either of the other two. So I have no idea what my actual distance is and I don’t know what the solution is. To make it more confusing, I’m to understand that my Fitbit uses my iPhone’s GPS when I connect them. So now I have three different numbers from essentially the same device. At least the overall times are the same across the three. Well, within a few seconds but I chock that up to a lack of button pressing synchronicity. The Scotiabank half marathon is next weekend. I’ve very curious to see what kind of time I can complete.