I don’t know anything about figure skating but I do like dance and I played hockey for a decade or so and they’re kind of a combination of the two, but Serpentine Loop has so much more to offer than just a crash course in figure-skating-meets-poetry. I really liked this book. It was launched a few weeks ago along with Kevin Spenst’s Ignite at a mediocre hipster joint in the old Heatley Block building on East Hastings, the best part of which (other than the poetry that eve) is certainly the Ola Volo piece on the wall above the bar. We sat at the bar for a little while then I leaned over to SC and said not too subtly that if the bartender ever decided to ask us hat we’d like to drink that I would have the pilsner on tap and that I was going over to the book sales table for a sec. He heard me. The dirty looks and curiously the service level both increase dramatically. 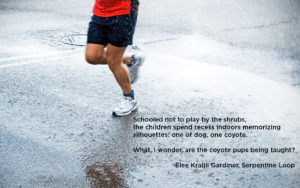 There’s this entry in Thomas Gardner’s running journal where in he comments about how unfriendly the runners are compared to his frequent trails in and around Poverty Creek and I got to thinking that the Seawall isn’t the friendliest place either though I think that’s Vancouver in general and not something particular to the running community here and I use the term community loosely though that’s as much because I prefer the solitude of running and really do not understand those that can run and carry on a conversation amongst each other but every once in a while I’ll pass someone and get a wave or a head nod and once on the Burrard Bridge a high five which was a bit weird. Anyway, I’m part of the problem though I’ve started to at least acknowledge another running if we make and maintain eye contact.