Books Read:
49. The Missionary Position Mother Teresa in Theory and Practice — Christopher Hitchens
50. In the Garden of Beasts — Erik Larson (in progress)

Last post I wrote that I really wanted to get back into writing weekly and less weakly. That is to say that I really wanted to break this habit of combining multiple weeks into single post. And then I decided not to write anything for three weeks. Weakly indeed. There are 16 weeks left in 2016. Let’s see if I can write 16 times. On Sunday, September 4 the Catholic Church made Mother Teresa a saint. So that pretty much trumps all the “cool pope” stuff that I have to read in social media and old-people media since Jorge Mario Bergoglio changed his name to Frank and started wearing silly(ier) hats. And who can avoid such an opportunity to revisit one of the greatest polemicists of our time. Not I. As for the Larson, well, suffice it to say that I’ve met a perfect storm of laziness in my reading habits of late, coupled with a book that is far denser than it appears on a book shelf. And I’m enjoying it, as much as you can enjoy reading about the rise of the Nazis in the 1930s and find it all eerily similar to Donald Trump’s rise in the political ranks in America. Rank indeed. 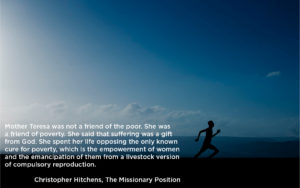 For all the concerns that I expressed in my previous entry about burnout or piquing or some other such nonsense it seems that the relevant word for the running part of this piece is the same as for the reading and the writing: laziness. I don’t know if it was complacency or boredom or what, and I don’t really know what changed, but since writing about how I seem to be getting slower I have achieved a successive string of personal bests at 10 km and 12 km and on a couple longer runs. The trick was to actually push myself rather than do entire laps of Stanley Park only breathing through my nose. Next weekend is the Eastside 10 km and I have a goal in mind that not long ago seemed ridiculous but now seems within the realm of possibility. I’ll let you know how that goes.