I accidentally read a book about running when I really just wanted to read the new Boyden book that I picked up at Paperhound the other day walking around in the rain that has been the predominant weather for the past weeks as if the pathetic fallacy is waiting for someone to say we fucking get it now knock it off for fuck sake fuck. Or something. I read this thing in that Canadian monthly that I disdain such that I dare not type its name, but I’ll link to the article here, so I guess that’s just as bad. I have a story about how much I hate said publication that only a very few people will ever know because they were sequestered in the same jury room as me at the CC and I’ve been sworn to secrecy upon pain of no further grant funding or something. Seriously, I don’t know what the consequences are anymore, and yet my lips are sealed. Mostly sealed. Anyway, Aguirre’s lips are not sealed and she says many things that really need to be said, and I’m happy that some middle-aged straight white dude wasn’t the one to say them. 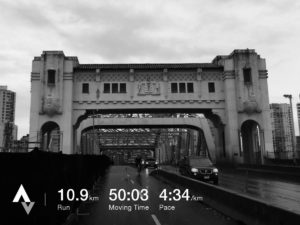 I was honked at in a crosswalk. Do people in cars, and on bikes for that matter, think that not walking negates the rules of pedestrian? What are the rules? Am I in the wrong here? Because I’m seriously going to start running with a pocket full of rocks or maybe some steel ball bearings and start busting up windscreens. I know there are bigger things to worry about, but the number of times I’ve nearly become a hood ornament whilst in a crosswalk is getting a bit worry some. The law of averages must be catching up, no matter what my pace is. Middle finger isn’t working. Maybe spidered window will? What’s the CCC on vigilante crosswalk enforcement anyway.