I didn’t read anything this week. I spent a lot of time listening to music and white noise and visualizing what I was going to be doing on Sunday. Some things helped more than others. Largest tax return in my life was good. Pretty much anything to do with vocational / local / provincial / federal / international politics was not so much. Trusting the training plan was very difficult as well. I’d never tapered before, which doesn’t mean much when I’ve never run a marathon before either, I suppose. In the lead up to Sunday I ran just 15 km over three days. 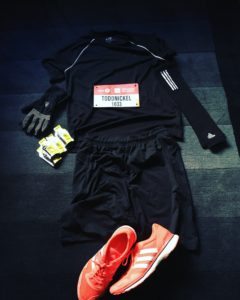 Why does everyone post their gear before a race? Not one to feel left out I posted this pic along with the BMO Live Results link. I decided to wear this particular shirt from Joe Fresh that I bought it at the Superstore on Grandview Highway when I thought I might give this running thing a try. I’ve come a long way, but I haven’t forgotten how I got here. Like most of them do, the idea came to me while out running. I wasn’t even sure I had the shirt anymore.

Sunday was beautiful and clear. I was up at 5:30 a.m. and didn’t need an alarm. Excited and nervous but feeling at least mentally confident I went for a walk around the West End to try to settle my mind and stomach before a casual jog down to the Canada Line to catch the Skytrain up to Queen Elizabeth Park. The start was a blur. At 5 km I was just under my pace and by 9 km that had grown to 2 minutes. I felt good. I’d trained for that 9 – 11 km hill. At 21 km I was still under pace and feeling fine. That 1 km stretch of hill from Spanish Banks up to West 4th is cruel and unnecessary. Bastards! At 29 km just coming up onto Burrard Bridge the 3:30 pacer caught me. The bridge got awfully crowded and my elbow connected at least once with someone trying to pass on the right. Accident I swear. As I passed the West End around 32 Stephanie was there with a home-made sign. I needed that because I was starting to fade. I knew I wanted to get to 36 km by 3 hours. As I rounded Prospect Point I checked my watch: 3:00:48. I was starting to hurt and had just crossed into the farthest I’ve ever ran. But I’ve ran this route I don’t know how many times. That helped a lot. The last 6 km was all in my head and my head was a lot of back and forth between “you can walk it’s fine” and “fuck you”. If Strava and my iPhone are to be believed, I somehow managed my last kilometre at 5:05. Stephanie was there waiting for me as I crossed the line for a chip time of 3:34:41. 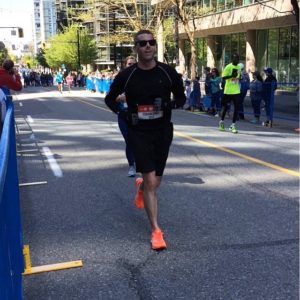 I’m reflecting on the experience now, as I have been for the past 36 hours or so. I expected to be more emotional at the finish line. Or maybe differently emotional. I was pretty euphoric and very lightheaded. The one thing that’s really bothered me in these hours since crossing that finish line is that for all the book launches and art openings and readings and events that I’ve supported not one of my friends came out to support me. Except my love, best friend (and coach whether I wanted coaching or not) who was there when I needed her and was there at the finish line. 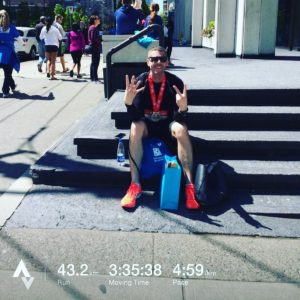 Final thoughts. It’s the economy, stupid. I have trouble trusting devices. I turned on my Garmin watch and my Strava iPhone app at the same time. Garmin recorded 42.8 km and Strava 43.2 km. So that’s annoying. The times, however, are both pretty close to the finish line clock (I was a bit preoccupied and initially forgot to turn them off), which means that over the course of a 42.2 kilometre course I ran an extra 500 to 1,000 metres by not choosing the most economical line. That’s a lot. I wanted to run 3:29:00 and I really don’t have any particular reason why I chose that time except that it seemed like a good number. I also wanted to run an average 5:00/km pace. If you’re even okay at math you know those don’t work out, especially with the economy issue I just mentioned. Strava says I ran 4:59/km for a marathon +1. Yeah I don’t trust it, but I’ll take it. I wrote earlier about my taper and I really don’t know about it. I don’t think I ran enough the week of the race but I have nothing to compare it too since this was my first time running an effing marathon. I ran a marathon. Forty-two kilometres for my 42nd year alive. I still think that’s crazy. 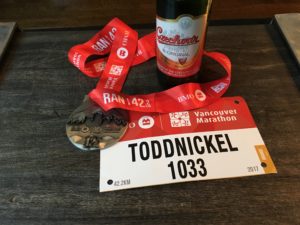 In February of this year, when I was chasing Sasquatch in the snow around Harrison Hot Springs still feeling sorry for myself for the First Half getting canceled due to weather, I was still saying  that I couldn’t imagine ever being interested in running a marathon, and sitting here typing this I can’t imagine never running another one. I’m thinking of a BQ for BMO 2018. It could happen.