A couple poetry books (both excellent) and a few articles in the September 11 New Yorker and Sep/Oct Playboy and, ahem, (online, does that count?) Canadian Running (I’ll get to that later don’t you worry). Jared Kushner’s Harvard Admissions Essay in NY was very funny. The long interview with Patton Oswalt in PB was very good. I mostly want to write about running because stuff happened. So let’s get to it, yes?

I’ve written a few times about my inability to taper and so with seven days to go before the Copenhagen Half Marathon, and not to feel left out of the party I ran a rather casual 21.1 km all to get The Great 13.1 Record digital badge in my Strava achievements. I have no idea if the record (most half marathons recorded in one day) was broken. Anyway, it didn’t seem to bother me. After a quick loop around Stanley Park I boarded an Iceland Air flight on September 13 and after times zones and, well, some time, landed in Copenhagen just after noon on the 14th.

The flat I let was a nice 15 minutes walk to Fælledparken were all the CPH Half stuff would take place. The expo started at 2 p.m. and I was there (a bit zombied but alive) by 4 p.m. to pick up my race package. Friday morning I woke, kicked jet lag’s ass, and went for a 13 km run around The Lakes and back through Langelinie. Then in the afternoon I grabbed a Bycyklen and rode the race route through the city, with a few detours and wrong turns. I thought it would help, but in retrospect I’m not really sure that it did. Maybe?

Saturday morning I went for a short 7 km run along Langelinie again and up and around the Kastellet ramparts, and then spent most of the rest of the day on a Bycyklen or relaxing in the Botanical Garden and the Assistens Cemetery in anticipation for Sunday’s race. I was looking forward to taking in the pre-race festivities on Saturday, which I had in my head starting at 2 p.m. They ended at 2 p.m. I still think that’s a stupid time to end but feel equally stupid that I didn’t notice until 1:45 when I was about to head over to the grounds.

Sunday race day. Well the race made news around the world for the ensuing thunderstorm. Canadian Running magazine found out I was there and asked me to write about my experience. I’m waiting to see if they accept my story. If they do, I’ll link to it here. If they decline then I’ll post shortened version of events here. Either way, stay tuned.

UPDATE: Canadian Running ran (ahem…) my story on their website. You can read it here: https://runningmagazine.ca/2017-copenhagen-half-marathon-race-report/

I had a great race in spite of the weather at the end, and posted a new personal best of 1:38:27. I loved that the race started at a rather civilized 11:15 a.m. On course entertainment was really great, and the crowds of spectators cheering everyone on were huge, like nothing I’d experienced before. I thought it weird that they used plastic cups at the hydration station. Because of the storm the finish area was shut down, so I didn’t get a photo with my finisher’s medal and I was really looking forward to the post-race festivities, especially after missing out on Saturday. Instead I went back to my flat and had a very long, hot shower. 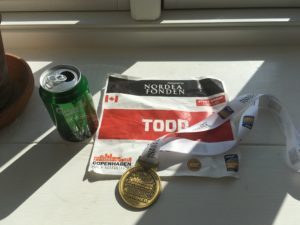 I ran 12 km Tuesday morning before packing up and heading to the airport just before noon. I had four full and two half days in Copenhagen, and I ran four times for 54 km. It was a great trip. I’d do it again.