Normally I would have woken up this morning hung over. Not because yesterday was Saint Patrick’s Day. Not even because yesterday was Saturday. Normally I would have woken up this morning hung over for no other reason than because I drank the night before. But this isn’t about why I used to drink. This is about that I don’t drink anymore. Sometime last summer Robin AKA thetattooedteetotaler posted the cover of This Naked Mind to her Instagram. I put a copy onto my iPad and promptly forgot about it. And then a few months later I woke up, hung over, and decided that I don’t want to anymore. So I read This Naked Mind and I quit drinking. I don’t know if I could have done it without the book. I’ve “quit” in the past: I got most of the way through “sober February” 2017, but not as far through as 2016; I got a late start to “sober January” 2015, but managed to stretch it a bit into February. Each time I desobered with the intention of moderation, which would last a week or two. My last drink was on January 1, 2018. I’m not sure I wanted to quit entirely. I’m still not sure. I do know that I quit cold-turkey (not recommended given the amount I drank and for how long I’d drank) and had no side effects, and I have zero desire to have a drink. Zip. Nadda. Well, not no side effects. I used to be pretty easily irritated; these past weeks I have given few fucks about anything other than my relationships and my running. I used to have G.I. issues that I chalked up to diet and genetics; they’re mostly gone. I used to spend 10 hours in bed each night and was always tired. Now I get six or seven of restful sleep and feel fine. I could write a lot about this book, its affect on me, my journey, get all preachy, start using crap terms like “journey”…. I’d rather not. There’s one point in the book that stands out that’s worth putting here, one that I used to wrestle with a lot: Does the idea of never drinking again bother you? That question is like an onion. I used to believe drinking made me feel better. Now I understand that my drinking made me feel awful when I wasn’t drinking. There’s a significant difference there. Maybe I’ll drink again but I currently have no desire to. At all. 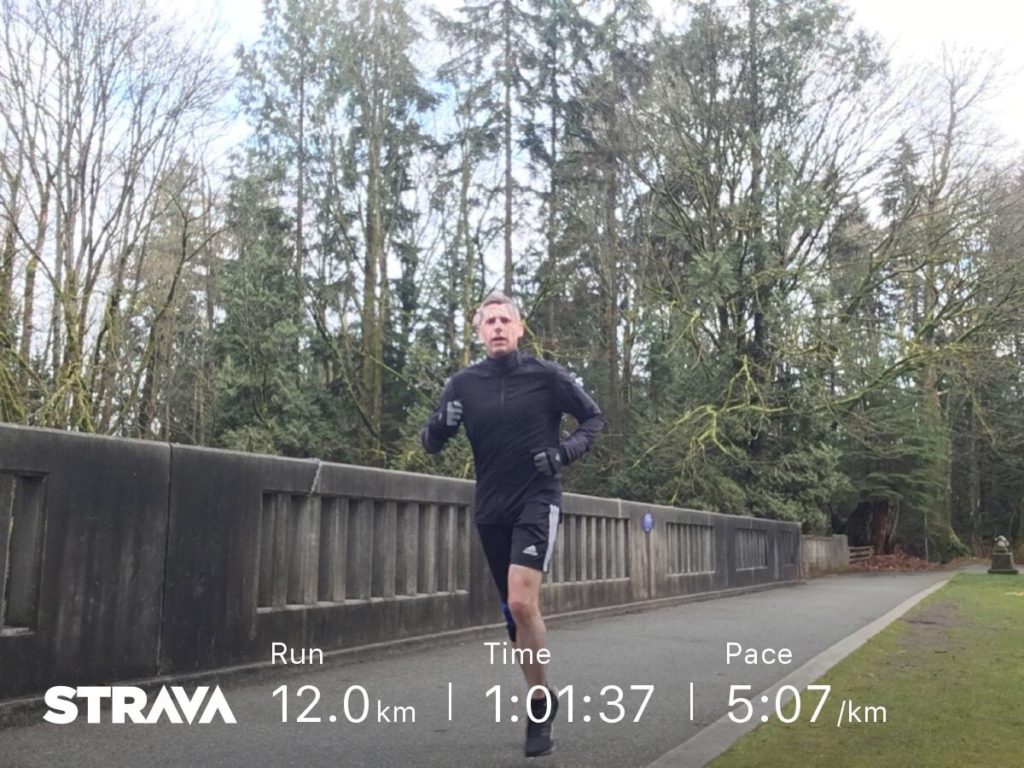 On the early evening of Saturday, May 6, 2017 I poured myself a stiff gin + tonic to keep me company while I made dinner. Then I opened a bottle of red wine to go with dinner (for the antioxidants obviously). The bottle finished I went to bed but couldn’t sleep. After tossing and turning for an hour or two I got up and poured a few fingers (fist?) of Johnny Walker Black, which I took to bed with a book. I finished (the blend, not the book) and finally fell asleep. A few hours later, I was at Queen Elizabeth Park. Three hours and 34 minutes later I was on West Pender just east of Bute crossing the finish line of my first marathon. I wanted to run 3:29. Maybe if I hadn’t had a dozen drinks the night before, and the night before that, and before that…I would have. I don’t know. But I’m going to find out. My body is finally getting healthy, although it’s not coming along quite as quickly as I had wanted. I was looking forward to a sober second look at the BMO Marathon, but this week I took stock of time and training, and decided to downgrade to the half. And I’m fine with that. I have two big PR goals for 2018, and clear eyes set on those.