I read Ticknor in one round-trip transit ride to-and-from work. It’s pretty short. But short is good sometimes too. You’ve noticed the amount of poetry in these posts, yes? Ticknor was not what I was expecting. It’s nothing like How Should a Person Be?. There were times when I was reading Ticknor and it felt like I was reading Kafka. My edition has an introduction by Ben Lerner and I didn’t bother reading it and then I finished Ticknor and I was around Nanaimo Station and still had another four stops on the Skytrain to go so I decided to take a look at what Benny had to say about the book and he writes that Ticknor reminds him of Kafka’s “The Next Village”. I don’t recall reading “The Next Village” and there’s a good chance that I have not. Yet, anyway. Maybe I should. I mentioned a couple weeks/posts ago the Talonbooks launch. Clint Burnham reading “No Poems on Stolen Land” from his collection Pount @ Guantanamo was far and away the best part of the evening. And most of the evening was pretty good. I like this collection. There’s a rather odd little shout-out to Poetry is Dead in the acknowledgements that I’m a bit confused by. There’s maybe a story there. Or maybe not. I really like Clint; I miss @prof_clinty in my Twitter feed. 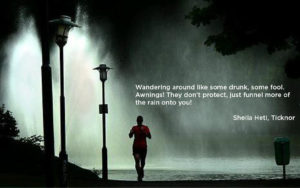 Until lately I’ve been grossly ignorant about all the races, and I was lamenting the other day that it would be nice if there was a list somewhere. Well, there are a few, and I was just grossly ignorant when it came to my Googling. Be that as it may, I learned from a Skytrain Station ad that apparently if I sign up for and complete the Granville Island Turkey Trot 8 km race over Thanksgiving and the Fall Classic at UBC in mid November (probably the half marathon) then, along with the BMO ten days ago, I’ll have the RUNVAN Hat Trick. I think I might give it a shot. Registration closes on May 31 so I’ve a bit of time to decide, but I think I should just sign up before I convince myself to back out. The word “trot” though. I really dislike that word. I broke 600 kilometres somewhere around the lighthouse under the Lions Gate Bridge today, so that’s exciting. I’m 30 per cent away from my goal of 2,000 kilometres this year and 36.5 per cent through the year. I’m pretty happy with those numbers.