Books Read:
19. The Disappearing Spoon: And Other True Tales of Madness, Love, and the History of the World from the Periodic Table of the Elements — Sam Kean

And so continues the ongoing debate I have with myself regarding when reading non-linear non-fiction or essay collections what does read really mean. Such is the case with The Disappearing Spoon, which I did not read cover to cover (which raises another question since I read it on my iPad…). Anyway, I “read” it and enjoyed most of it. I liked Kean’s ability to dumb down hard science without it feeling dumbed down or condescending. From what I can tell there’s some chronology going on in the book with regards to periodic elements’ discovery and I really enjoyed stuff from about 1912 until about 1950 mostly due to my fascination with the science around mechanized warfare. Cheerful, I know. But I like what I like. 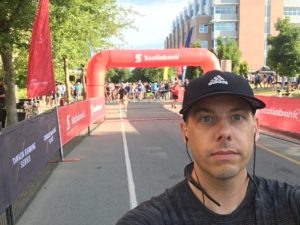 What I don’t much like is racing a half-marathon in mid 20 degree weather. But it turned out okay. I recall 2016’s Scotiabank Half Marathon being warm, but 2017’s was a scorcher. My goal was to run sub 1:40, which I was sure was possible but a bit ambitious. Last year’s Scotia Half I ran 1:46:46. Sunday morning was pretty typical pre-run routine except for the near hour long bus ride out to UBC at 6:15 a.m. I considered Car2Go but was worried about finding parking. I arrive and the start area was already full and the line ups for the entirely way too few port-o-lets were absurd. I opted for dehydration rather than excretion. The corral was full when I squeezed into the back at 7:25 to wait for the gun, and then we were off. I turned my Garmin on to indoors since it hasn’t managed to find a GPS signal in a few weeks (and I haven’t gotten around to contacting support). Just before 3 km I passed the 1:45 and 1:40 pacers who where running side-by-side. I don’t know either. I wanted to reach the 10 km marker in 47:30 or quicker, and when I crossed my stopwatch read 47:00*. I was right where I wanted to be, but knew from all my training on this route the next 8 km are the worst. (The hill just past 12 km up to West 4th is the worst-worst.)