27. Get Me Out of Here — Sachiko Murakami

The first couple days holed up in the Victoria offices of the Ministry of Community, Sport and Cultural Development I managed to escape down the street and around the corner during lunch hour to spend my per diem at Russell Books and I picked up a copy of Murakami’s collection of poems (among others). I have travel on my mind, as it is one week until I get on a plane for CPH via RKV. That’s Copenhagen via Reykjavík. What, you didn’t know that? Neither did I. And I sort of wish that Murakami had included a glossary of airport codes in her book, but it was otherwise fine. Fun and fine. A break from the mountain of grant applications that I was adjudicating. And before you get all confidentiality apparently, I’m allowed to say that it happened and that it was for the Early Career Development program and, well, that’s pretty much all that I’m allowed to say about it. Suffice it to say, though, there are some pretty excellent young artists in this province that are going to make Montreal or Berlin very proud once Vision Vancouver finishes selling off this city completely. Excellent stuff, really. This was my third jury, and in spite of the daunting commitment it is one of the most rewarding experiences. I’d almost do it for free. Actually, i don’t really want to do the math. I’m pretty sure it’s below minimum wage if you put any sort of effort into it. And I’m the reigning heavyweight champion of imposter syndrome. There was effort. 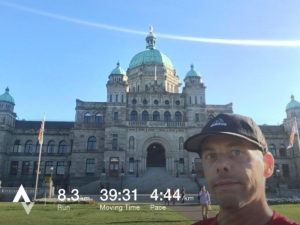 And while there on the last day of August with the sun setting in the wildfire haze blowing in from central B.C. and with the Legislature behind me I ran past 2,000 kilometres so far this year. So about four months ahead of last year, and about 275 kilometres ahead of my pace to reach 2,600 by December 31. I celebrated with a glass of wine in my hotel room at the Royal Scot, peering into Acrobat Reader on my Macbook Air. I only ran 42.6 this week, which is off of the 50 per week that I’m aiming for, but I’m fine with that since I am so far ahead but I’m also looking forward to a few things, the impending one being the Copenhagen Half on the 17th. It’s way too early to be tapering. Which brings up something else: On Sunday, September 10 there is a fun run on Strava “to be part of a global attempt to set the record for the most half marathons completed in one day” and I’ve signed up for fun and I’m wondering how stupid it is to run a half marathon seven days before racing a half marathon. Because initially I thought that Copenhagen would be a fun run and I wouldn’t try to kill myself but as it gets closer I’ve gotten the urge to try to break 1:38 and I think I can do it but I wonder if The Great 13.1 Record is going to mess it up. I have no idea. I have a few days to figure it out. I’d ask for comments but I know that no one actually reads these.