Seems that a lot of people did not like this book and then it went on to get long-listed for the Man Booker so what. I’m an Amis fan, though it’s been a long, slow slog through his library. And I still like his memoir Experience the best. Maybe I should reread that. You know, since I’ve nothing to read or anything. In spite of the warmth from the roaring flames of the CanLit Dumpster Fire 2016 I decided to go to the Real Vancouver Writers Series year end party and as usual bought a bunch of raffle tickets and expected to not win anything as I’ve been going to RVWS events for years and always buy raffle tickets and never win anything but this time I won (Sad Mag subscription) and then I won again (a pair of very hipster, ahem, artisan ceramic cups) and then I won top bid on the Chuck Tingle t-shirt for his Hugo Award nomination, which if you don’t know the back story then read it and hilarious. 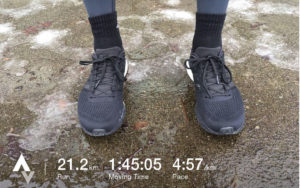 I bought myself Christmas presents and Christmas came early in the form of a new Garmin Vivosmart HR+ and a couple pairs of Adidas Adizero Boston 6 runners and everything is better. I’m still getting used to the Garmin interface and the iPhone app, but I’m already much happier with its distance and tracking accuracy. New shoes are really great. After logging 1,145 km (oops…) on my Nike Air Pegasus 33s it was time for something new. To say the least. The Boston 6s are lighter and fit my narrow feet better than the Nikes. So far, no complaints. Which is weird for me. I complain about everything. I’m a marathon and a half or so away from my goal of 2,000 km for 2016 and with three weeks to go to cover 67 km I think I’m going to make it, barring illness or injury and I better not have just jinxed it.