From the re-issue copy that I have in my grubby hand by way of BookThug, “Pillage Laud is a lost cult item from the last century. It used MacProse, freeware designed by American poet Charles O. Hartman as a generator of random sentences based on syntax and lexicon internal to the program; it worked on Apple systems prior to OSX and is now in the dustbins of computer history. In 1999, the news was shocking: Moure’s poems are written by a computer. In 2011, now that everyone is a computer, the book can be read anew.” I guess this collection begs questions around authorial intention, among other things, but in spite of (or regardless of) I enjoyed the book. Besides, New Criticism is dead, right? I found Teju Cole’s debut novel on my bookshelf and it still bothers me that I cannot recall how it got there. I don’t remember buying or borrowing it. So if it’s yours, please let me know. I share some sentimentality with the protagonist Julius. He spends a lot of time walking seemingly aimlessly around his city, though he doesn’t seem to feel like it’s his city. He’s better at articulating his states of mind while wandering, whereas I run more than walk, and less aimlessly. But…. 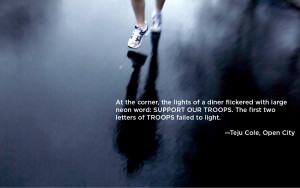 I’ve been trying to be more aware of what I think about when I run. The reason I started running initially a couple years ago was as much for mental health as it was for getting my (arguably) fattening self out from in front of the XBox. A lot has changed since then. I run a lot farther than I used to (duh) and I tend to spend more time contemplating my aching body than ruminating on my lying, cheating ex. Though one provided more fuel than the other. Guesses? Anyway, as I’ve shifted my routine from early mornings to middays and afternoons I’ve found the petty annoyances that plague my runs of late are other people. Other runners are cool, for the most part. The other day as I rounded that last corner before Third Beach I passed a guy jogging and juggling, and it took a bit of willpower not to push him into Burrard Inlet. Purely out of jealousy, of course. If I could only juggle, and not just juggle, but juggle and jog at the same time…. But the real annoyance is the strollers. And the strollers pushing strollers. So I’ve come up with a new sea wall rule: if we’re making eye contact for a few metres and you decide that it’s more important to maintain your entire-path-covering parallel stroll with your family/friend(s)/significant other/Tinder date then I’m allowed to elbow you in the face as I try to run by. Only seems fair.