So I slowed down on the reading this past week and I cannot quite put my finger onto why that happened but it did and George Elliot Clarke is an extremely accomplished poet and the current Parliamentary Poet Laureate and this is his first novel and you’d expect it to be beautifully written and it is. Unlike that sentence. I like it when poets write novels. Still one of my favourite books is by the American poet Nick Flynn, and it has arguably one of the best titles of a novel ever: Another Bullshit Night in Suck City. Sometimes I’m a sucker for nostalgia, and reading Clarke’s book brought memories of one of my favourite courses in my undergraduate career — an English lit elective on motorcycles and speed in literature (think Pirsig, Guevara, etc.) peppered with contemporary philosophy via the likes of Donna Haraway and Paul Virilio. This book would have fit in nicely. (So too would have The Flamethrowers for that matter.) 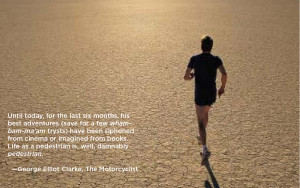 Part of why I ran so little this week is just because of how the days fell and that I infrequently run two days in a row (since the “incident” in January) and partly because I’m getting sick and I don’t want to get sicker. Anyway, it’s March now and since I don’t have a whole lot to write about running this week I’m looking back on my sober February. I’m generally careful to not make the correlation=causation mistake. But Fitbit has given me some interesting data to consider. I’ve read and heard that one sleeps better sans alcohol. Well, for me at least, if Fitbit is to be trusted, is not the case. I saw no change whatsoever in my sleep patterns, in fact I found it more difficult to fall asleep at night. I did notice a change in the mornings, in that I didn’t wake up feeling like absolute garbage and spending the first few hours in a fog or grossness. But I didn’t feel “great” and “rested” and “alert” and whatever else I was “supposed to” feel. But not feeling like garbage was pretty great. The two biggest changes were in my weight and heart rate. My resting heart rate fell 14 points from the beginning of February to March, and I lost nearly eight pounds. Now I’m left wondering if pull-ups have gotten easier merely because I weigh less.