I’m slowly reading my way through Nelly Arcan. It’s not an easy journey. I love her writing style, though I feel like she makes me work hard. And the content isn’t exactly uplifting. Burqa of Skin is a collection of writing predominately reminiscing on an abhorrent (she had a few in her too short life) experience appearing on an episode of Tout le monde en parle (I think that’s the name of the program) on french CBC. I watched bits of it on YouTube, but I don’t understand french, much less Quebecois french, so I was left with trying to read body language. It would be interesting, though interesting is perhaps not the appropriate word, to watch it with English subtitles. I’m also slowly making my way through the CUE Books catalogue–an embarrassing admission, given that I was its managing editor for a little over two years. I didn’t plan on following Arcan with LaFrance’s species branding though the works seem to complement each other in their exploration of the treatment of women, sex workers, and marginalization. I thought species branding was great and deserves a wider readership and critical analysis. I know where you can get a copy, ahem… 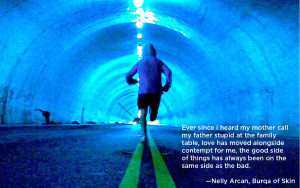 Three bouts of physiotherapy and my knee is feeling much better and I’m starting to reramp-up my running to make up for lost time. My physiotherapist seems to agree, and suggests that I don’t need to see her again for a few weeks unless knee takes [another] turn for the worse. I feel like I’m behind. I know that I’m behind. I’m nearly to the end of January and I haven’t broken 100 kilometres yet, and I need to be somewhere near 150, although I expect to be running farther frequently come autumn. Still, I feel like I should be further along, though I really don’t want to hurt myself any more and make things worse. The weather has been cooperative for the most part, although I don’t mind running in poor weather; at the least it ensures fewer meandering idiots on the sea wall for me to run into. Which is nice.